For a long time it appeared as if Franz Schreker had disappeared from general musical consciousness. Together with Korngold, Zemlinsky, Schulhoff and Viktor Ullmann, the composer who perished in Auschwitz, he belonged to the part of the Western musical scene which during the Nazi period was stigmatised as being degenerate and subsequently destroyed. Gradually, however, Franz Schreker and his works are gradually returning into the public eye: justifiably so, as there is a great deal of interest to be (re)discovered.

Schreker's biography was equally moulded by the great successes during his lifetime (he was for a certain time world famous and the only musical dramatist whose operas could easily hold their own ground against those of Richard Strauss) and also the inglorious end to his career precipitated by the social and political situation, causing both the composer and his works to fall swiftly and permanently into oblivion.

Born on 23rd March 1878 in Monaco as the son of the originally Bohemian photographer Ignaz (actually: Isaak) Schrecker, he grows up during travels across half of Europe and, following the death of his father, arrives in Vienna in 1888. The period of his adolescence is marked by poverty, as his mother, née Baroness Bretfeld zu Kronenburg, can barely manage to support the family through a grocery and general store and sewing work (she was considered to have married beneath her own rank and received no aid from her own family). Schreker, who soon begins to spell his surname without a "c", is therefore forced to contribute to the family income and takes up a post as organist in Döbling at the young age of 14. At the same time however - thanks to financial support from the Countess Alexandrine von Windischgraetz - he is able to begin violin studies at the Conservatory in Vienna and in 1897 subsequently moves into the composition class given by Robert Fuchs. 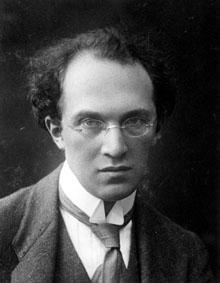 Following the conclusion of his studies in 1900, Schreker is initially employed in various bread-and-butter jobs, for example as clerk and private tutor. He composes his first works during this period, but these are largely ignored by the public. His first great success however is achieved in 1908 with the pantomime "Der Geburtstag der Infantin" ["The Birthday of the Infanta"] based on a story by Oscar Wilde, commissioned by the sisters Grete and Elsa Wiesenthal and danced at the Viennese Kunstschau in 1908. The same year, he forms the Philharmonic Choir which he directs until 1920. Schreker gradually achieves public recognition through the performances of contemporary works with this choir such as Mahler's 8th Symphony in 1912 in Prague (conducted by Alexander Zemlinsky - Schreker will conduct the symphony for the first time in 1914) and the performance of Schönberg's Gurrelieder in 1913.

In 1912, the first performance of Schreker's second opera "Der ferne Klang" (following the less significant early work "Flammen") is given to great acclaim in Frankfurt, and Schreker is appointed professor of composition at the Music Academy in Vienna in the same year. This breakthrough heralds a decade of great success for the composer.

In 1913, the first performance of "Das Spielwerk und die Prinzessin" is given simultaneously in Frankfurt and Vienna. Despite - or perhaps specifically due to - the scandal which this opera caused in Vienna, Schreker's name was soon on everyone's lips and the following operas "Die Gezeichneten" (Frankfurt 1918), "Der Schatzgräber" (Frankfurt 1920) and "Das Spielwerk" in the single-act version with shortened title (Munich 1920, conducted by Bruno Walter) transformed him into one of the most successful composers of the time. The culmination of his success was the appointment as the Director of the Musikhochschule [Music Academy] in Berlin where he gave extensive musical tuition in a variety of subjects between 1920 and 1932.

The musical developments following the First World War - for example, the strict constructivism which found expression in Schoenberg's twelve-tone technique and in Alban Berg's "Wozzek", the beginning "new functionalism", the success of Brecht and Weill with their song-operas and the influence of American jazz which spread into the concert hall and opera theatre - all pointed in a different direction to the intrinsic artistic path taken by Schreker; as a result, his later works failed to achieve major success. Political developments and the spread of anti-Semitism were also contributory factors, both of which heralded the end of Schreker's career. Plagued by depression and self-doubts, Schreker loses his position as Director of the Musikhochschule in Berlin in 1932 and, the following year, also his post as professor of composition at the Akademie der Künste. He suffers a stroke in December 1933 and subsequently dies in Berlin on 21st March 1934 shortly before his 56th birthday.

Schreker was primarily a composer of works for the stage. He had produced nearly his total output of lieder around 1900. The only works still to come were "Das feurige Männlein" (1916) and the "Two lyrical songs" on texts by Walt Whitman (1926/29). The same is true for his orchestral works. His Symphony in A minor, Op. 1 (1899), the "Intermezzo for String Orchestra" Op. 8 (1900), the symphonic overture "Ekkehard" Op. 12 (1902/03), based on Victor Scheffel's novel, and the "Romantic Suite" Op. 14 (1903) are all early works. The only orchestral compositions to appear in later years were: the Chamber Symphony (1916), a "Short Suite for Orchestra" (1928) and "Four Short Pieces for Large Orchestra" (1930). The "Overture for a Large Opera" on the other hand was planned as the overture to an opera "Memnon" which was never written.

It is remarkable that Schreker wrote almost all his libretti himself with only two exceptions: "Flammen" was composed on a text by his childhood friend Dora Leen and "Der Schmied von Gent" was based on other material (Charles de Coster's "Smetse Smee").

The following table displays Schreker's operatic works at a glance:

Schreker's stage works display an impressive and at times overwhelming tonal development. Whereas his first work "Flammen" still exhibits traces of the preoccupation with the music of Richard Strauss and Claude Debussy, a brief period of free tonality ensues during which the composition "Der ferne Klang" is created. In the works following this composition, Schreker finally attains a more simple harmony accompanied by an increasing sophistication in rhythm and orchestral colouration.

"Der Schatzgräber", Schreker's most popular opera up to the present day, possesses stylistic homogeneity, balance and unambiguously tonal (although still highly chromatic) harmony. Memorable motifs and well-defined melodic shapes appear more frequently than before; this is probably the main factor for the positive reception of this work even by conservative journalists and the wider public. While the orchestration of "Die Gezeichneten" was described by many critics as being over-ornate, that of "Der Schatzgräber" possesses extreme transparency despite the opulent harmony and instrumentation. Within this context, the review appearing in the Leipziger Tageblatt following the first performance is enlightening:

Through "Der Schatzgräber" Schreker had suddenly advanced to become the leading opera composer in the entire German-speaking world. This work and the two operas "Die Gezeichneten" and "Der ferne Klang" were staged 32 times between 1917 und 1921 and given a total of over 250 performances.

The well-known critic Paul Bekker had had a decisive influence on the general reception of Schreker's works, in particular the positive reaction by the critics to his opera "Der Schatzgräber", through his polemical work "Franz Schreker. Study of the Criticism of Modern Opera" which appeared in 1918 to general acclaim. Schreker had achieved the unification of the various streams of post-Wagnerian opera to form an independent operatic type. Two years later however, emerging controversies caused Bekker to refine his judgement of Schreker more precisely to dispel misconceptions which could have resulted from his enthusiasm for the composer. The following quotation is from an article which appeared in the Baseler National-Zeitung in 1920 and characterises Schreker and his works thus:

Schreker appears to have been influenced by a series of other composers such as Richard Strauss, Gustav Mahler, Richard Wagner and Claude Debussy. At first it seems as though numerous composers can be heard in his music; closer analysis shows however that Schreker has found his way to a completely personal language, to his own sound.

Almost all his stage works are dramaturgically centred round his specific tonal vision. The virtual renunciation of the coherent force of thematic logic in his self-penned libretti allows great scope for his complex tonal concepts and elaborate tonal technique. His operatic compositions are characterised by a sweeping orchestral instrumental texture and an exceedingly differentiated harmony, at times penetrating far into the territory of atonality.

From the aspect of content, Schreker's œuvre focuses on the extension of the horizon of everyday experience. Visions, dreams, fairy tales and legends allow him to create experiences and emotions going beyond normal reality but simultaneously retaining their connections. Opera as the "powerhouse of emotion" (Alexander Kluge) gives Schreker the opportunity to manifest feelings and emotions in an extreme and extraordinary fashion.

There is evidence that Schreker had made a close study of Otto Weininger, the author of the sexual-theoretical discourse "Geschlecht und Charakter"["Sex and Character"], and also probably read the works of Sigmund Freud. He possesses no inhibitions regarding provocation and the breaking of taboos and picks out the new psychoanalytical view of Eros and sexuality as a central theme in his works. He sees human beings as creatures of instinct and pursues this instinctual life in his operas. The result is a precisely constructed artistic saturation of the emotional underworld of everyday life which can only be superficially misunderstood as a flight from this everyday life into a world of symbols.

Franz Schreker jotted down the following text on an undated sheet of paper under the heading "recollections" - possibly for the purpose of a planned but never realised autobiography. The extract is taken from: Haidy Schreker-Bures, H. H. Stuckenschmidt, Werner Oehlmann, "Franz Schreker", Lafite [u.a.], Vienna 1970.

Franz Schreker's sarcastic self-characterisation appeared in April 1921 in the Musikblätter des Anbruch published by the Viennese Universal Edition. Schreker had created this montage out of criticisms and newspaper articles.

Franz Schreker on the subject of his music - an extract from Meine musikdramatische Idee, published in 1919 in the Musikblätter des Anbruch. 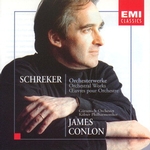 The CD "Orchesterwerke" performed by the Gürzenich Orchestra Cologne Philharmonic and conducted by James Conlon is suitable for an introduction to Schreker's tonal world.

The CD, released in 1999 and now out of print, includes the "Vorspiel zu einer großen Oper" (1933), "Intermezzo für Streichorchester op. 8" (1900), "Vorspiel zu einem Drama" (1913) and the "Romantische Suite op. 14" (1903). Particularly the two overtures, which are so to speak symphonic by-products of two operas, are exemplary for Schreker's later style.

Schreker Foundation
The Schreker Foundation's home page with an abundance of valuable information on and about Franz Schreker.
Schreker, Franz (August Julius)
Short Biography, written by Christopher Hailey.
Universal Edition Wien
Extremely detailed index of works and performances.
Joseph Marx (1882 - 1964) - Master of romantic impressionism
Four years younger than Schreker and also born in Austria, Marx and his (symphonic) œuvre, which in polyphonics and sonority is close to Schreker, have also almost faded into obscurity. The official Website of the Joseph-Marx-Society presents a comprehensive view of life and work of this composer.